As mobile workstations go, Lenovo’s ThinkPad P17 Gen 2 is a beast of a machine. Big and heavy, and with configuration options rising to a Xeon W11955M processor, 128GB of RAM, 6TB of storage across three SSDs and a 4K screen, it packs a lot of power.

There are currently three customisable configurations available on Lenovo’s UK website, with prices ranging from £3,253 up to £5,386 (inc. VAT). There are many more off-the-page models in the US, starting at $1,869 and topping out at $5,159, along with a build-your-own option. The latter starts at $1,739 and can rise to over $7,500 with all the hardware options maxed out. 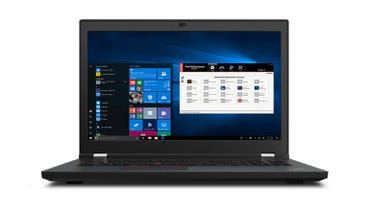 As you’d expect, the ThinkPad P17’s build quality is generally very good. Although the lid section is a little more flexible than I found the Dell Precision 5760’s to be, it’s still sturdy, and the base section is extremely solid. As with other ThinkPads, the lid carries a silver logo with a red dot over the ‘i’ that’s illuminated when the laptop is on. On this 17-inch model, the logo looks somewhat lost in the expanse of the lid.

The screen sits within disappointingly large bezels. I measured the short side bezels at 17cm and the long upper bezel at 23mm, both to the outer edge of the lid, while the long bottom bezel measured 26mm to the hinge. The result is a distinctly moderate screen-to-body ratio of 71.3%.

The screen, which has a 16:9 aspect ratio, is recessed quite deeply into its bezels, giving it an old-fashioned look. More importantly, video viewing is considerably less immersive than it is on minimal-bezel screens. In this respect, the ThinkPad P17 pales in comparison to the Dell Precision 5760.

The 720p video camera is accompanied by Lenovo’s trademark sliding ThinkShutter, which can cover the webcam when it’s not needed. There is also an IR camera for Windows Hello face authentication.

The speakers push their sound upward through a sizeable grille that sits above the keyboard. They don’t deliver a great deal of volume, and are significantly lacking in bass tones. Anyone wanting to impress with audio-rich creations might find they are not up to scratch.

Lenovo has equipped the ThinkPad P17 Gen 2’s keyboard with a separate number pad. This has not taken up as much of the area available as it could have, and as a result some of the keys on the main array are squished — notably the four immediately to the left of the Enter key. The number pad keys are also slightly smaller than those of the main array. All that noted, the keyboard is comfortable to use, with a nice springy action and slightly ‘clacky’ audible feedback. I was able to touch-type at my full speed with no trouble.

The touchpad is pushed off centre by the presence of the number pad. This feels more significant on such a large laptop than it would on a smaller one, and I felt I was working at an awkward angle to the screen to accommodate it. I got used to this reasonably quickly, but others might not.

The touchpad itself is rather small, and it’s impossible to scroll the full height or width of the screen in one sweep even if you start at an edge. Compared to the Dell Precision 5760’s huge touchpad it feels distinctly cramped. Fans of Lenovo’s signature red TrackPoint won’t be disappointed, though, as this sits between the G, H and B keys, accompanied by the usual three buttons above the touchpad.

There are three off-the-page configurations of the ThinkPad P17 Gen 2 available in the UK at the time of writing. All have discrete Nvidia graphics and a fingerprint reader in the wrist rest. The two more expensive options include mobile broadband. All three can be customised.

One area where this laptop beats Dell’s Precision 5760 is its array of ports and connectors. For those who have not made a full transition to USB-C, this might appeal. Standard on all configurations is a pair of USB-C Thunderbolt 4 ports, a non-Thunderbolt USB-C ports, a pair of USB-A 3.2 ports, a full-size HDMI connector, an RJ-45 Ethernet port, an SD card reader and a 3.5mm audio in/out jack. There’s also a Nano-SIM slot on configurations with mobile broadband, along with an optional smart card reader.

The three USB-C ports, Ethernet port and a bespoke power connector are on the back edge, where they are a little more difficult to access, but this does leave room on the left and right sides for large fan grilles.

The ThinkPad P17 Gen 2 is powered by a 6-cell 94Wh battery, which Lenovo says lasts for ‘up to’ 9 hours. As you might expect given its 4K screen and high-end specification, our review unit didn’t get close to this level.

I ran my usual mainstream workload of writing into web apps, browsing the web and streaming media for three hours from a full battery charge. After that period the battery had fallen to 13%. That suggests total battery life of around 3.5 hours, under only moderate load. If this laptop’s size and weight don’t put you off taking it on your travels, this result should do.

Still, it charged quickly: from a starting point of 13% it got to 41% after 15 minutes, to 63% after half an hour and to 81% after 45 minutes. Even so, working away from a mains power source is pretty much out of the question with our high-end review configuration.

Lenovo’s ThinkPad P17 Gen 2 is a 17.3-inch mobile workstation that can be configured with some extremely high-end specifications. However, its lack of a touch screen option, large screen bezels, bulk and weight, and poor speakers do it no favours.

Battery life probably isn’t high on the list of requirements for a 17-inch mobile workstation, but if you want more than the 3.5 hours delivered by our review unit, you’ll need to specify a lower-resolution screen and a less powerful CPU/GPU combo. Which isn’t really the point with a workstation-class laptop.

Getting the most from your laptop with these awesome accessories

Home Improvement Near Me