Chinese smartphone-maker Realme has, up to now, been known for budget and mid-range handsets. However, the Realme GT 2 Pro is different. It’s the first phone I’ve reviewed that’s powered by Qualcomm’s top-end Snapdragon 8 Gen 1 Mobile Platform, an octa-core chipset announced late last year, which includes support for Wi-Fi 6, 10Gbps 5G mobile data, 8K video and fast AI acceleration. According to Realme, the GT 2 series, which will also include a Snapdragon 888-based GT 2 model, is the company’s “most premium flagship line-up ever”.

As well as taking a step upmarket, Realme has boosted its eco-credentials, using just 0.3% of plastic in the GT 2 Pro’s packaging, and making the rear panel from a biopolymer that looks distinctive while also reducing carbon emissions during manufacture. 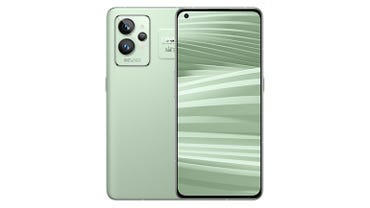 Looks don’t make a great phone, but they do make a distinctive one, and Realme has gone to town with the backplate of the GT 2 Pro by using a biopolymer made from renewable resources. It has a visually pleasing etched finish, which Realme thinks looks like paper. I disagree, but it’s attractive anyway, as well as being grippy and fingerprint-resistant. Also, it didn’t slip off the arm of my chair once during the testing period.

How well the GT 2 Pro will stand up to bumps, knocks and scratches in the long term remains to be seen, but it felt tough during the review process and didn’t pick up any dings. There’s no formal IP rating for dust and water resistance though.

Realme says that the production of its bio-based copolymer backplate (from SABIC) has reduced carbon emissions by 35.5%. However, the company offers no detail about what this percentage relates to, which is a pity.

My review unit was a pale green colour – Paper Green. There are two other options: Paper White, which also bears the same backplate design; and Steel Black, which looks more conventional.

There are two drawbacks, though. One is that the signature of the designer is stuck on the backplate, where it detracts from the otherwise clean design. The other is that the provided silicone bumper is an opaque grey, so you must decide between protecting your handset or seeing that designer backplate.

My Paper Green GT 2 Pro had an aluminium frame that didn’t quite match the colour of the backplate. It’s not a serious issue, but given Realme’s emphasis on design, the aesthetics would be improved either by a contrasting silver or bronze, or a better colour match.

The camera array sits in a raised area in the top left of the backplate, which has a plastic surround that’s reasonably well colour matched. Its location means the handset does a familiar rock-and-roll act when laid flat on a desk or table and the screen tapped.

The power switch on the left and volume rocker on the right fall neatly under the fingers. The dual 5G SIM slot is on the bottom edge, alongside a speaker grille. There’s a second speaker grille above the screen. Sadly, Realme hasn’t found space to accommodate a 3.5mm headset jack. Nor is there a MicroSD card slot for storage expansion.

Each of the edges have antenna strips – two on each, except for the bottom, which only has space for a single strip. Realme says there are 12 antennas in all, which can switch automatically to provide the best network and Wi-Fi reception. Along with 360-degree NFC, this should make performance noticeably better. I certainly had no complaints about wireless connections of all flavours during testing.

The AMOLED screen is a real highlight. Its WQHD+ resolution (1,440 x 3,216 pixels, 525.9ppi) delivers impressive sharpness, although the default setting is 1,080 by 2,412 (394.4ppi). The panel supports 10-bit colour (1.07 billion colours) and 100% of the DCI-P3 colour gamut, and a peak brightness of 1400 nits, which should take care of outdoor viewability. You won’t want to operate at peak brightness for long periods, though, and to conserve battery power there’s support for 10,240 automatically adjusted brightness levels.

The small cut-out for the front camera in the top left of the screen doesn’t detract from the near edge-to-edge viewing area. LTPO 2.0 technology ensures that the refresh rate adjusts dynamically between 1Hz and 120Hz, helping to minimise power consumption while allowing video to shine. The 1000Hz touch sampling rate is impressive on paper, although I didn’t notice a huge boost in usability compared with other high-end handsets.

Topping off an impressive array of display specifications, the screen is protected by Corning’s top-end Gorilla Glass Victus.

Given the excellent screen, it’s a shame the speakers don’t deliver better quality sound. There’s plenty of volume, but sound quality is light on bass and not particularly rich.

With 256GB of internal storage and 230.5GB of this available out of the box there’s enough capacity for the lack of a MicroSD card slot not to be a concern. The 12GB of RAM is welcome, and I found performance in everyday use to be smooth. Benchmarking the Snapdragon 8 Gen 1 achieved average Geekbench 5 scores of 1210 (single core) and 3239 (multi core). These numbers put this Snapdragon 8 Gen 1-powered handset in the top echelon of the Android benchmark charts.

Android 12 is overlain by Realme UI 3.0, which includes a range of tweaks and usability options. There are multiple ways to personalise the screen’s colour rendition, video smoothness and so on, and users can fiddle with icon styles, colour schemes and the edge lighting that can be used for alerts.

The Realme Sidebar is a pop-out app launcher, designed to help with one-handed use, that can be populated with frequently used or favourite apps. Apps can also be opened as floating windows or in split-screen mode, allowing you to maximise the use of screen space. There’s a lot of bloatware, including apps for social media and online shopping, but with a little patience any unwanted apps can be uninstalled.

The main camera is a 50MP f/1.8 unit with OIS, based on Sony’s IMX766 sensor. It’s joined by a second 50MP f/2.2 ultra wide-angle camera – the first with a 150˚ field of view, Realme says. Night and street shooting modes are available on the main screen of the camera app. Both of these cameras deliver great point-and-shoot images, and I’d tend towards full-screen shooting with the ultrawide lens by default. 8K video recording is supported.

A 40x magnification micro-lens camera delivers what Realme calls ‘microscope mode’. Note that you only get 20x magnification from the camera optics, although this can be taken up to 40x digitally. Switching between the two zoom amounts is a matter of a single on-screen click, so there’s less shakiness than there would be with pinch-to-zoom, but there’s no graduation between the two options: it’s one or the other. There’s no autofocus either, so getting what you want is a matter of holding the phone the correct distance from your subject. You’ll find microscope mode via the More button on the main camera app window.

The fisheye feature is also found in the camera’s More menu – disguised as ‘150°’. It produces some fun results, with both full screen and circular images on offer. The former is somewhat disappointing, the latter more engaging.

The GT 2 Pro’s large 5,000mAh battery kept the phone functioning for 16 hours and 34 minutes under the PCMark for Android Work 3.0 battery life test. When I set it to play YouTube video continuously for three hours, it lost 16% from a full charge, suggesting battery life of just under 19 hours.

The handset comes with a 65W SuperDart charger, and when I started charging the battery at 19% it got to 75% in 15 minutes and 99% in half an hour. There’s no wireless charging capability.

The Realme GT 2 Pro is the most sophisticated handset Realme has launched to date, and it has some compelling features. The backplate design is original and visually alluring, seems solid enough, and allows for a non-slippery, fingerprint-free grip. Long-term durability remains to be seen, but that aside it really impressed.

The screen is absolutely superb, performance is good, battery life is impressive, and the multiple antennae make for reliable connectivity. Dual 5G SIM support isn’t widespread yet, and that’s also nice to see.

The microscope photo mode needs attention, and the speakers are disappointing – unforgivable, really, for a handset with such a great screen. And although this may seem a minor complaint, the provided bumper should be transparent so that the backplate can shine through. If this were my handset, I’d replace the bumper immediately.

Realme 8i review: An affordable phone with a 120Hz screen and good battery life

The best cheap phones: Flagship features for under $450

The best Android phones: Expert picks with some surprises

The best phones: Top 10 smartphones you should buy